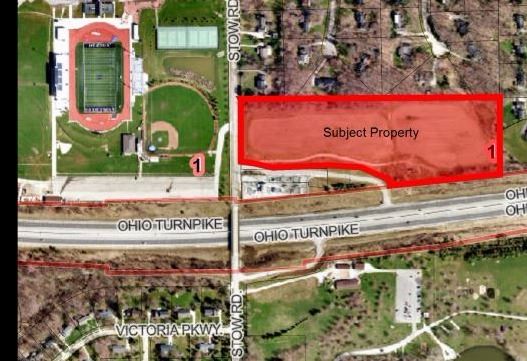 
Application has been submitted for an amendment to the official zoning map and an amendment to the definition of net density. The property proposed for rezoning is a 12-acre parcel east of Stow Road and north of the Ohio Turnpike (a vacant parcel east of Hudson High School). The parcel is presently zoned District 1 – Suburban Residential Neighborhood. It is being proposed to be rezoned to District 3 – Outer Village Residential Neighborhood. The land is presently being farmed. A 52-unit town home development to be served by a private road is proposed (four units in each of 13 buildings).  Both the existing and proposed zoning districts are predominantly single family detached residential, but town homes are also permitted in both districts. Town homes are allowed at a density of two units per acre in District 1, whereas they are allowed at a density of five units per acre in District 3.

Density is a measure of the number of dwelling units in an acre. For new development in Hudson, this measure is based on the entire area of the land less certain features, including streets and easements. Net density is used to describe density with these exclusions. The same applicant for the zoning map amendment is seeking an amendment to the definition of net density that would not delete easements from the entire area of the land in the calculation of density. The result would be that more dwelling units would be possible on the development site. For example on a ten acre parcel where three units per acre is permitted:

Although the zoning map amendment applies to the property described above, the change to the definition would apply throughout the City.

July 25, 2017: City Council will discuss the amendments at a workshop and refer them to Planning Commission.

July 18, 2017: City Council conducted first reading of the ordinances that would adopt the amendments.

June 12, 2017: The applicant introduced the amendments to Planning Commission at a preliminary review.